The last year hasn't exactly been dominated by new musical adventures with Pocket Life. There has been literally no activity in the band. I don't know what's coming. In the end I guess it's a matter of motivation.

A good old friend of ours messaged me yesterday just to tell me he'd been listening to the second album, Rattle When You Walk, and that he liked it. The creative ideas, the production. We had practically no feedback on the album from outside our most narrow bubble so it kind of saved my weekend. As for motivational factors, that certainly counts.

We still have some unfinished business in Pocket Life, that's for sure. If we'll ever finish it ... well, I hope so.

Today - your birthday - was the official release date of Umlaut Songs ten years ago. At that time it had been two years since we lost you. I remember feeling that we had taken ages to finish the record. And now that's ten years ago and I can't understand that's true because it feels like it was only yesterday.

Listening to the album now it feels like you're still standing right next to me with your guitar. Of course it's a strong memory but it's also like so much of your spirit is expressed in those songs and captured in those recordings of your playing. I so wished that everybody could have heard what I hear in those tracks.

Congratulations on your birthday, Ole.

Pocket Life still isn't very active. But we've taken up a new practice of making recordings when we meet instead of just rehearsing or arranging stuff. So, little by little, new songs are becoming actual tangible recordings. That way the good things that happen when we play aren't all simply lost when there are breaks when we don't get to play that much.

I don't know what it will lead to but I like doing it. I like listening to the tracks and to think of where the songs are going. You would have loved that part too, I know. And besides, I like the idea that somebody might eventually get to hear what we've been up to.

Tonight it's ten years ago that we played our first concert without Ole. It's also ten years ago today that the police cleared Ungdomshuset in Jagtvej - an event that provoked violent riots in the streets of Copenhagen, shop windows being smashed, cars being turned over and set on fire. Here's the blog post I wrote two days later about this truly weird night:

We played a gig without the guy who more than anybody defined what Pocket Life is all about. And it was OK. We all know that an idea can live on when the father of the idea is gone, and the strange Pocket Life gig last Thursday gave us a reason to believe that Pocket Life can live on though Ole is gone. Our performance was ragged and far from flawless, but it was definitely still Pocket Life.

We'd like again to thank our guests, John Buckley McQuaid, Kasper Søegaard and Erik Gleerup, who contributed very distinct and personal interpretations of three Pocket Life songs each. And thanks to the people who made it to the show - despite the riots over the clearing of Ungdomshuset in Jagtvej*). We'd also like to thank Hans-Henrik Siig at the radio-show "Mod Strømmen" in Christianshavns Kanal for his support and for running such a great radio show.

*) Of course, the strangest gig we've ever played would coincide with the first night of riots following the clearing of Ungdomshuset in Copenhagen. They were burning a car just around the corner from Christianshavns Beboerhus while we were playing. This is a stupid and completely regrettable situation which has arisen due to the incompetence and arrogance demonstrated by the politicians when the house was sold seven years ago.

Thanks again to John Buckley McQuaid for reminding me of that strange nigtht ten years ago by sending me this photo he took just around the corner from Christianshavns Beboerhus. He was in the dressing room when he heard explosions from the streets. He grabbed his camera and ran out to see what was going on: 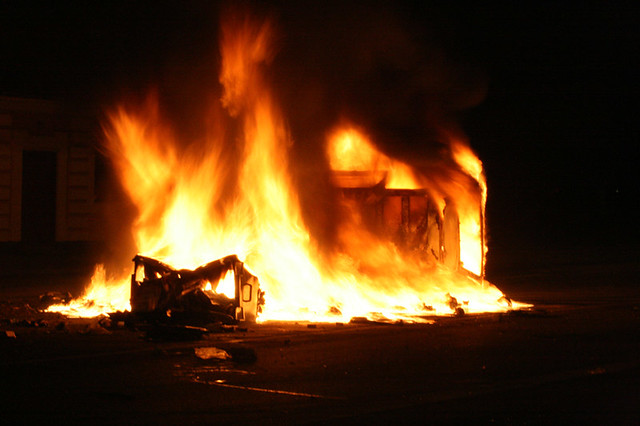 The scenes in the streets were an extreme contrast to the warm and solemn atmosphere at the concert. Here are a couple of shots by Rune Luk from inside:

Congratulations, Ole. It's your birthday. This time around it's more than ten years ago that we lost you in the band. That's pretty hard to comprehend. So much has happened in those years and still it's like the things that didn't happen weigh more. Things that might have been. Sometimes, at least, it feels that way.

But we have to keep thinking of the things that we did in fact achieve. Even if Pocket Life hasn't done much in the past year, I know the spirit that the five of us established way back still lives. And you played such a huge part when that spirit came about. We have been playing the songs and we shared them with a lot of peolpe. And we created new songs with some of that same spirit. Ten years on it still remains.

I still believe we will get moving again at some point. If we don't it won't be because the movement inside us has stopped. I know this because whenever we meet in the band, and especially when we play, it's like no time has passed. The whole thing is still there, just waiting for us.

It's been ten years since we lost our friend, Ole Luk Sørensen. Ole was Pocket Life's thought leader. His songwriting and guitar were essential parts of what defined Pocket Life's musical style. Go find the first album, Umlaut Songs, to get a glimpse of what it was all about. Ole's tragic death stopped the album from becoming what it could have been. It contains the songs we recorded with him and while it may not be as focussed or as brilliant as it would have been, had he lived to see it through, it still captures some stunning moments.

I wrote the song Longed For This about three years ago and I'll share a demo of it here. The loss of Ole is among the things that are in there somehow - and it may become a Pocket Life song when we see more active days.

Longed For This on SoundCloud

Congratulations, Ole. You would have been 54 today. I turned 50 a week ago myself. It's so weird to think about that I'm older now than you ever got to be because I still think of you as the older one. The one I can turn to when I'm not sure what to make of some situation or how to deal with things. And I really miss that from time to time.

Your birthday has become the time for me to write a little about how things are going around Pocket Life. It fine for me to give that a moment of thought, and I think it's nice for the few who still keep an eye on us.

Well - I had little to say last year and even less this year. We played a couple of small acoustic gigs, and that was cool as always. But that's it. All four of us have worked a little in other musical projects, but not much. Once again life has just kept us all busy doing other things.

So what am I to make of this? I know that Pocket Life has more to say. Much more. And I feel confident that at some point we will get back to our business and start doing things again. I hope it happens within this year so I'll have something more to write about next time. Either way it would have been good to have you to talk to about this.

Hey Ole, congratulations on your birthday. Maybe I should try to blog some more so the first lines of wouldn't be so conspicuously similar from one post to the next.

The year that has passed since the birthday entry I made last year hasn't been the busiest - even by Pocket Life standards. We have had our hands full with other aspects of life, I guess.

We have been playing a couple of new songs and we have lots of other new stuff just waiting for us to get 'round to it. We played two of the new songs at our gig at the Hjortshøj Festival last summer and they went down really well in arrangements we call "disco" - though I'm sure a lot of people wouldn't immediately recognize the disco traits in them. I think we'll be working further in that direction.

Recently we've been fooling around with some live cover version videos of current pop hits just for the hell of it. It's a fun way to try out some new ideas or see what happens to old ideas in new situations.

I think I'll put some of the photos that Franseska Anette Mortensen took of us at the Hjortshøj Festival on our Facebook page. It could do with a bit of attention.

Congratulations Ole - it's your birthday again. I actually have a couple of things to tell you this time round.

The second Pocket Life album, Rattle When You Walk, was released last summer and we had a great release show at Radar in Aarhus to celebrate the event. Esther Maria and Dave Harding made guest appearances with Pocket Life as backing band and it was fabulous night. Yeah - I would have loved to share it with you.

Two of the songs you left us - songs that you never got to record yourself - have made their way onto the new album. Let It Go with Chris Eckman appearing on keyboards and e-bow guitars and Love For A Boy In Love with Vudi on slide guitar. We're so proud to have two of the musicians you admired most play on your songs and they both did an incredible job. Chris also mixed the album and helped us get the most of the recordings that Jakob Berthelsen made with us.

And we're proud of the result. I think you would have agreed that it's a fucking great album. And your two songs are definitely among the gems on the album - as they would be pretty much anywhere. So thanks once again for all the songs you gave us. We can only try to do them justice.

About the Pocket Life blog

Frankly, we simply haven't visited MySpace where our blog used to be for a while. Not since I blogged for Ole's birthday last year. Sorry. But I have a feeling we're not the only ones who haven't. So I just discovered that the MySpace blog is ... gone.

Ok. We'll make our own blog. And we will recover all the old blog messages too. In time. This is the birth of the Pocket Life Blog. Whatever.